Good morning,
I want to propose a new feature for Karrot.
My group Foodsharing Luxembourg is requiring 3 trial pickups from newbies as part of the onboarding process. Currently, we use an additional communication tool and a group for each cooperation we also have on Karrot to organise these trial pickups. As soon as you have done your 3 trial pickups, you are invited to our Karrot group. Unfortunately, the use of this second platform adds some complexity to our communication.
I know that you could you use the application chat on Karrot to communicate and to maybe organise these trial pickups. Unfortunately, this quickly becomes complex to oversee as well if there are many new people interested in joining.
Therefore, our onboarding manager Lia and I have created the following proposal of a feature to organise trial pickups.
We have thought about adding one or more special slot fields for applicants to the pickups. As long as your application is pending, you could see these empty slots and sign up for them.
Here is a mockup:

image11562×176 46.6 KB
The members could only sign up for the green slots, while the applicants could only sign up for the yellow slots. I am not sure about the view for the applicants yet as they usually do not see any other page apart from their conversation.
Each finished trial pickup would then also be added to the application conversation.
What do you think? How do you handle trial pickups if you have them? I am curious to learn more about your way of doing things and about your feedback.
Lovely greetings,
Daniel
2 Likes
How to make Places more suitable for conversations?
Weekly call about Karrot development
bruno November 15, 2020, 12:54pm #2

I’ve actually heard about the same proposal from other people in our group here in Gothenburg, so probably it makes a lot of sense to multiple groups. I like it!

One thing we’d have to figure out is the flow of creating these applicant slots to a specific pickup. Should it be accessed and created through the Manage Pickup page on a particular Place? Or should we add an extra button for each individual application to select existing pickups to add the extra slot to?

I am not sure about the view for the applicants yet as they usually do not see any other page apart from their conversation.

I think that could be displayed the same way pickup page is displayed to members, but only with the one or many pickups available to the applicant

One thing we’d have to figure out is the flow of creating these applicant slots to a specific pickup. Should it be accessed and created through the Manage Pickup page on a particular Place? Or should we add an extra button for each individual application to select existing pickups to add the extra slot to?

I am not sure whether I understand your second idea about adding a button to each application. Do you suggest to assign an applicant to specific pickups or to provide an applicant with some empty slots on different pickups they could choose from?
I think an option to set a number of applicant slots on Manage Pickup page per pickup would be sufficient. The slider for setting the number of slots could be reused, except that it is possible to set it to 0. Like this, no group would be forced to use this feature, and you could be specific per pickup as some pickups may not be suited for new people.

I think that could be displayed the same way pickup page is displayed to members, but only with the one or many pickups available to the applicant

Do you suggest to assign an applicant to specific pickups or to provide an applicant with some empty slots on different pickups they could choose from?

Different pickups they could choose from. If all pickups with slots available to applicants appear to all applicants, then it is probably less complex and easier to implement.

The idea with a button at the application page or chat is just to make it easier to add these applicant slots to specific pickups. I’m thinking of cases in which the group members responsible for or active with onboarding can choose the pickups they will bring applicants with more flexibility and more spontaneously. They could greet the person at the chat, suggest a date and create a slot right away on a pickup that fits their personal schedule.

But now I’m having second thoughts on whether this idea would make things smoother or not.

Thanks @danveg for the proposal! It’s definitely a topic that has come up before.

The “newcomer” thing shows people with a green bit under their little profile icon: 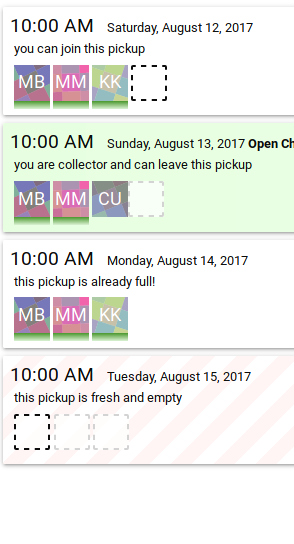 The discussion here so far is to get users to be able to do the introductory pickups before they get accepted to the group if I understand? Whereas these previous discussions were based on the idea they are inside the group, but with a special status that says they are not quite ready to do pickups.

I think this is quite a big difference to consider whether they are in the group or not. Not just from the code perspective, but for the person and the group.

My personal leaning (although maybe I am biased by the code perspective), would be to accept them to the group, but to then work in making the newcomer/trust/editor things more suitable for this trial pickup use case.

There is one idea (from the PR linked above) where after you do a pickup with someone you are prompted to give them trust, and I could imagine building on that by adding trial pickups for newcomers, and in the feedback the non-newcomers can decide whether to give them trust to get them beyond their newcomer state.

So, given we already have newcomer status in karrot, maybe it could be to just to be able to configure each activity (or series) to be:

The code perspective is that we make a lot of assumptions that access to data is controlled by which group you are in, not by which groups you have an open application to. It already causes us some complication to allow the applying user to see the right user information. If we expanded on what applying users can do (as described in the initial proposal), then I would actually consider revisiting our earlier decision, and making even applying user in the group, but with a special “applying” role…

Sorry if this is hard to understand, I realise it could be a bit confusing to read!

In our weekly call last week we thought it would be a good idea to talk through this in our weekly call on 2020-11-29T11:00:00Z so if @danveg is available then, we can do that, otherwise maybe we schedule a special call at another time?

Thank you @nicksellen for summarizing what has happened on this topic already!

I have not thought about building on the existing newcomer feature before. I guess I have not totally understood how this works. For example, I have only assumed that this newcomer highlighting disappears after some time automatically; I have not made a connection to the trust system yet.

Enhancing the newcomer feature would even be the better option because you keep both application and trial activities separated from one another. For instance, there could be people only interested in some types of activities. In Foodsharing Luxembourg, we only require trial pickups, but before that you can already volunteer on events and look after Foodsharing Points. Therefore, it would be great to be able to configure it for each activity as you suggest.

I am still pondering on when the newcomer status goes away at the moment and whether this could be made configurable.

I will join the call.

I have not thought about building on the existing newcomer feature before. I guess I have not totally understood how this works.

From reading [Info] Karrot trust system and user levels it seems everybody who is in the group but doesn’t have editor rights is a newcomer.

I clicked the discussion thread about it too [Discussion] Karrot trust system and user levels and it re-awakened all those topics! I think there are some good ideas in there that tie into this topic too. Basically, iterating on the trust system…

Enhancing the newcomer feature would even be the better option because you keep both application and trial activities separated from one another.

I’m glad it makes sense to you too

and your example is a good one.

I am still pondering on when the newcomer status goes away at the moment and whether this could be made configurable.

Yup, which also relates to these three proposed enhancements to the trust system and the idea of expiring trust from @bruno.

I think it wasn’t really sensible so far to restrict what newcomers can do, as giving trust to users maybe isn’t well enough understood anyway, but if we improved these aspects (e.g. prompting users in more places, like when giving feedback… or maybe after they write their first message on the wall?) then maybe it becomes more viable to restrict certain functionality for them until that trust is gained.

There was also a proposal in the discussion to call it approval rather than trust.

I will join the call.

Maybe we can prepare something in advance to focus our discussion. It can get a bit overwhelming with all the related topics that feed into it… one idea would be to draw a map of the system as it is right now (borrowing a practise from our design process we’re doing at the moment).

@nicksellen Could you point me do an example of that kind of map please?

Sure! Here are 3 from the design sprint book (https://www.thesprintbook.com/) pdf

… and you can see some of our maps over at Governance Meeting Notes - normally a bit more complex/messy, but I think that’s our world

So, all of these ones are looking at “actors” (people of different types) having various interactions on their way to some kind of goal. So, in this case the boxes might have a new person, who applies to join, is accepted (or not), is able to participate a bit (in real life and/or online), and then gets some trust that enables them to some other pickups. Something like that.

I did a quick sketch…

meta: … would love to find a(n open source) tool to store these maps, so we can collaboratively edit, but also add comments/discussions on them over time … the whiteboard tools don’t seem quite right.

You are fast, @nicksellen! Thanks for preparing this topic.

We had a very nice discussion last Sunday about this, the notes are here Weekly call about Karrot development

The outcome was written as: Daniel will make some sketches to post on the forum, then another call in 10+ days

I was also add, if you are not finding time @danveg to do more sketches, we can also do some during the next call, more like a working call/session. We had quite good experience in our governance process of doing that.